Average Savings in the UK: How Do You Measure up to the Latest Stats?

Wondering how you compare to the statistics for the average savings in the UK?

Whether you’re the kind of person who hides their extra money under their mattress, or you keep all of your cash in a high-interest account, it’s not news that saving is the key to protecting your financial future. Unfortunately, many of us Brits struggle to manage our cash correctly.

According to research from Finder.com,

Average Personal Savings in the UK

Before we dive too deeply into the numbers surrounding savings and retirement accounts in the UK, let’s take a look at how much Brits typically save for their personal purposes on average.

A report by Neyber into 10,000 UK employees found that around 1 in 7 Brits have nothing saved up at all. That means that almost 15% of us would have no way to cope if we were suddenly hit by lost income, or a huge new expense like divorce, redundancy, or bereavement.

One of the reasons that our average personal savings are so inadequate in the UK is that we’re often dealing with large amounts of household debt and struggling with low incomes. However, a poll in the UK also found that around a tenth of the population say that they’re just “terrible” with money. Another one in 10 people admitted in the poll that they’re usually spending more than they earn. It’s no wonder that we struggle so much with our finances when we admit that we don’t know how to look after our cash.

In recent years, the average household savings in the UK have been plummeting. However, there’s a good chance that your age could have an impact on your behaviour with money.

Average Savings by Age in the UK

An analysis from the Office of National Statistics found that around 53% of people between the ages of 22 and 29 had nothing saved up between the years of 2014 and 2016. Those who did have money in the bank often had about £1,600. The good news is that, not including student loans, young people in the UK are also less likely to be in debt than in previous years.

There are many reasons why you might be able to save more when you’re older than you would when you’re younger. For instance, the ONS study indicates that 48% of people aged 22 to 29 only earn less than £20,000 each year, which makes it difficult for them to save for retirement, future goals, or anything new that they might need.

How Do You Compare?

To get an idea of how you compare to the average savings by age and income in the UK, you’ll need to look at the data available for each individual age group. Unfortunately, you might find that the data is more upsetting than it is reassuring. Studies from The Independent indicate that Generation X (aged 39 to 54) should have at least £227,780 saved up if they want to be comfortable when they retire.

Here’s a quick table to help you calculate where you stand. This applies to people who need an average income of around £19,000 per year when they retire. 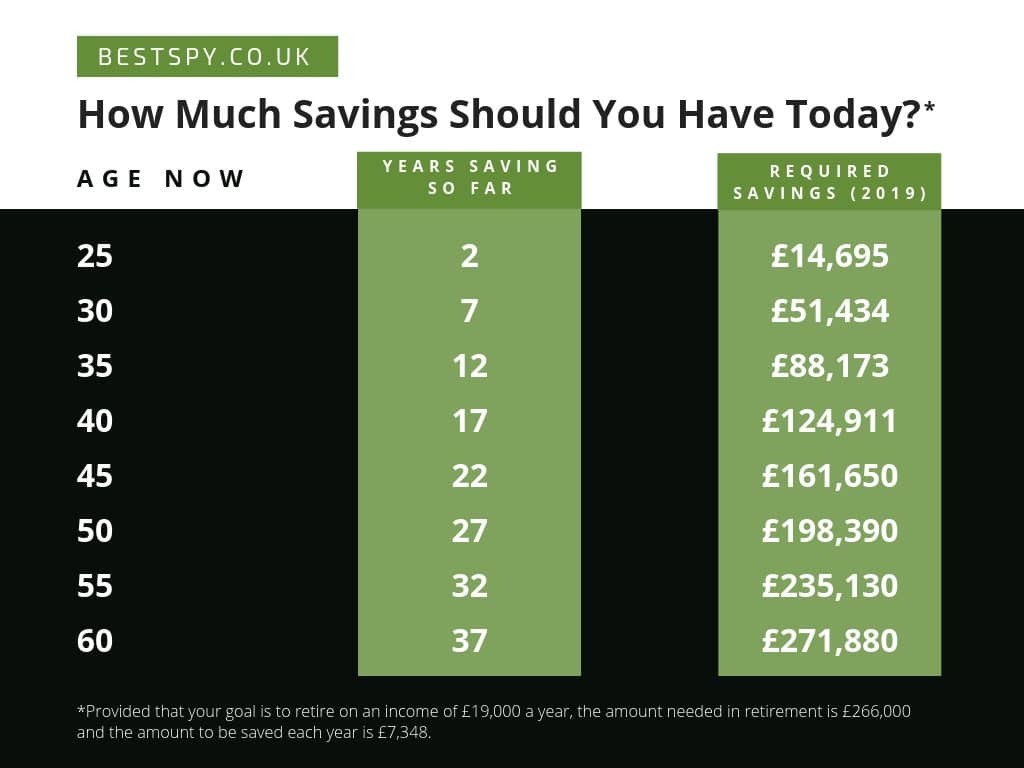 Most financial advisors recommend that you should ideally have an emergency fund tucked away which can cover at least 3 months’ worth of living expenses or any unexpected bills. Of course, this doesn’t include the amount of money you need to put aside for retirement and rainy day fund goals.

Looking at the table above, the real answer to “How much savings should I have at 50 in the UK” might be closer to £198,390 plus three months of your standard income.

Additionally, if you’re thinking, “How much savings should I have at 30 in the UK?” The answer is to preferably have more than £51,434. While most people’s bank account won’t come close to that figure, the truth is that any contribution will help.

You might, at this point, haven’t reached the required savings for your age group. On the other hand, this doesn’t mean you shouldn’t start saving as much as you can, whenever you can. The faster you start saving, the better off you’ll be. Studies also indicate that once we’ve started saving a few thousand pounds, it becomes much easier to continue building our nest egg. 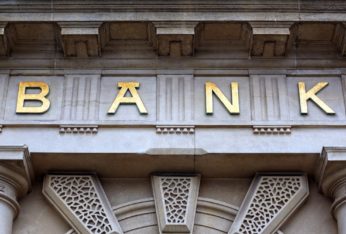 Just as our savings are dwindling, our bank account balances are suffering too.

The average savings in the UK are being gradually diminished by the fact that UK households are dealing with vast amounts of debt. According to the TUC, the average family owes around £15,385 to credit firms in 2018.

According to trade unions, household debt has risen in 2018 because people are dealing with issues like wage stagnation and poor employment, which forces us to increase our borrowing. With so much debt to worry about, it’s no wonder that our bank account balances and savings options are suffering.

The rise of the gig economy and zero-hour contracts are thought to be contributing factors too. After all, it’s becoming far more difficult for today’s consumers to get a job where they can rely on a regular monthly income.

A survey indicates that the average British adult has around £276 of disposable income to their name each month – which equates to around £10 per day. Usually, once we’re finished paying for things like rent, mortgage, food, utility bills, and other living expenses, there’s very little “spare” cash left over for anything else. In the poll mentioned above, around 4 in 10 respondents said that they’re not earning enough money to have any disposable income at all.

How Are Brits Dealing with Savings in the UK? 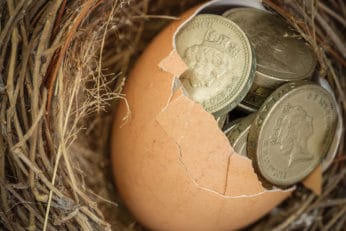 As you can see from the research and statistics so far, there’s a significant problem with the way that today’s Brits handle their money. Information revealed by the Money Charity found that as of January 2019, the balance of savings and debt throughout the UK remains to be uneven. Our debt levels are going up, while the average savings we can tap into in the UK is going down.

Part of the reason why UK consumers are so bad at setting money aside is that we don’t have any proper financial goals in place. The study from the Money Charity found that 2 out of 3 adults in the UK haven’t got any kind of financial plan or budget to guide their spending decisions. When you don’t have a strategy in place for how you’re going to spend, then it’s easy to let yourself live from paycheck to paycheck, spending whatever you earn.

One important point to note is that the gap between the average monthly savings that UK consumers should have in their bank accounts, and the money they actually save isn’t just caused by a lack of preparedness or interest. Some British people share that they do want to save more money, but according to 40%, they’re just not earning enough to supplement their finances.

Other Factors That Affect Your Average Savings

Aside from age and your approach to money, there are other factors that might affect how Brits save.

You’ve probably heard about the idea of the “gender pay gap” before, where people believe that women earn less than men. Although this often isn’t the case in today’s modern world, it is true that women generally have fewer funds stashed away than their male counterparts. This goes against the trends elsewhere in the world, where research suggests that women are usually better savers than men.

Where you live in the UK may also make a difference in how much you can save. The average savings by age 25 in the UK are likely to be a lot higher in London than they are elsewhere in Britain. This may be because Londoners can earn a little more than their counterparts in most jobs. However, it’s worth noting that the price of essentials like food, utilities, rent, and mortgage in London is usually a lot higher too.

Despite the more expensive cost of living to worry about in London, 70% of Brits in the capital said that they will add to their nest egg on a monthly basis. Additionally, Londoners are generally more open to the idea of using technology to manage their finances. According to the report into savings in London, around 21% of people use an app to help them save. This is almost double the national average of 12%.

The further up towards the north of the country you get, the more the savings habits of the average individual will change. People in the North West typically say that it’s very challenging for them to save any money. Additionally, these people share that they are more likely to have nothing to fall back on when something significant happens in their lives. On the plus side, people in the North East typically fare a little better. Outside of London, people in County Durham, Northumberland and Tyne, and Wear are more likely to add to their funds on a monthly basis.

London is important – but the idea that all the jobs are in London or that the starting salary in London compensates for the cost of living differential may need examination. @lmicharlie at #ASET19 pic.twitter.com/mbfdWlo8ZW

How Do You Handle Your Monthly Savings? 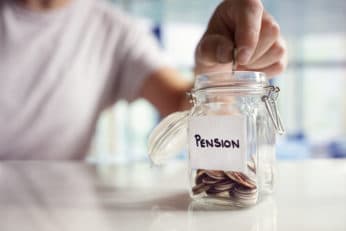 As you can see in our exploration of the average savings in the UK, the amount you save each month or each year is likely to differ according to a number of factors. The older you are, the more you need to have saved to help you prepare for retirement. Additionally, people of all ages can struggle with saving due to the rising issue of debts and loans in the UK.

On the plus side, regardless of where you live in the UK, it might help to know that Brits are very optimistic when it comes to their savings habit. Around 91% of people surveyed in 2017 said that they were planning to add more to their savings in the year ahead. Additionally, around half of us say that we’re doing what we can to cut back on our monthly spending so that we can improve our savings potential.

While the spending and saving habits in the UK may currently leave a lot to be desired, the country remains cautiously optimistic that we’ll be able to make a positive change going forward. How do you measure up to the average savings figures for someone of your age, in your location? Share it with us and let us know in the comments below.